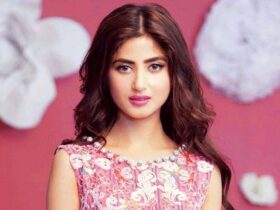 Mahira’s personal life is in front of her fans. Mahira met Ali Askari in the United States and got married in 2007 without family consent in an elementary function. The couple has a beautiful son Azlan Askari, who was born in 2010, but after eight years of marriage, the lovely couple got separated in 2015 as Mahira’s career life didn’t work in their favor. The couple had differences because Ali Askari was against her acting career, but Mahira preferably chose to end her marriage than to risk her showbiz career.

She is a Karachi, Pakistan based, US-educated, who started her career as a VJ.

Apart from acting, Mahira hosted the “Most Wanted” show on MTV Pakistan “Weekends with Mahira” on Aag TV.

A few things – Stay home as much as possible. This can help the virus from spreading in a big way. Wash your hands. Build your immunity, lots of vit C. Help daily wage workers and others who will severely suffer during this time. Refrain from spreading unverified Whatsapp videos and articles. Oh also, naming and shaming ain’t cool! We are in this together. We will be responsible together. And fight this together. Ameen. ♥️